Wishing everyone a Happy Holiday! By the time that you get this column we will be right in the middle
of the busy holiday season. With Thanksgiving behind us and the hectic pace of the Christmas and New
Year holidays around the corner, let us all be thankful for all that we have, our wonderful families and
great Porsche Club friends.

Yosemite Region 60th Anniversary:
Yosemite Region celebrated its 60th Anniversary on October 27 th with more than 60 members in
attendance. The original location of the event, Ironstone Vineyards in Murphys, California was cancelled
due to concerns of fire and yet another power shutdown by PG&E. Scrambling to find an alternate
location, club president Chuck Pierce made an executive decision to keep the event on schedule and
hosted the event at his home. My hats are off to Chuck for the quick recovery. The tour started as
scheduled but with a modified route. High winds were the menu of the day as some 15 cars departed
from the Starbucks Coffee parking lot in Manteca for some great backcountry driving roads.

Zone 7 Presidents Meeting:
The fall president’s meeting was held for the first time in many years in the Sacramento area and was
attended by all the presidents or their representatives in Zone 7. A special presentation by Ed Won, past
president of Diablo Region, on building your relationship with your local Porsche dealer was well
received. Ed provided a lot of insight into the some of the common pitfalls in the relationship and tips on
how best to develop a relationship that is mutually beneficial to both the club and the dealership. The
most important point to remember is that the dealer is in the business of selling cars and service and
that anything our clubs can do to reciprocate adds to the value the dealership gains from this
relationship. The president’s meeting is one manner in which national communicates with region
leadership. The next meeting will be scheduled sometime in March. Among the topics discussed
included a financial report submitted by Zone treasurer, Howard Thomas, tips on succession and
transition planning, membership retention, Parade 2020, and a report by each region on what went well
and did not in their regions and also what goals they were working on for 2020. In attendance were;
Brian Adkins (Diablo), Ed Hunter (Golden Gate), John Reed (Loma Prieta), Steve Taty (Monterey Bay),
Craig Steele (Redwood), Gregg Plourde and Rob Lee (Sacramento Valley), Ed Suarez and Darrick
Duerksen (Sequoia), Wayne Martin and Terry Topolski (Shasta), Millie Smith (Sierra Nevada), Chuck
Pierce and David Boyd (Yosemite).

The annual awards banquet was held in conjunction with the presidents meeting and was attended by
nearly 60 competitors who participated in the Zone Autocross and Concours series. The Concours series
hosted 7 events over the year while the autocross series hosted 8 events.
The Concours series overall winners by class were: Bill Sardella, Full Concours, Ken Lewis, Touring I,
Thorsten And Simone Kopitzki, Touring II, and Jim McMahen, Street. The prestigious Rookie of the Year
award went to Juan Fernandez.
In the autocross series, there were award winners in almost all of the classes with multiple drivers who
competed. The highly coveted PAX awards for men and women both had 3 award recipients. In the
men’s PAX, Grady Carter garnered top honors with Monty Pack finishing 2 nd and Andrew Blyholder,
finishing 3 rd . In the ladies PAX competition, Stacy O’Connell garnered top honors followed by Corrin
Vanetti, 2 nd place and Kelsey Leet, 3 rd place. Kelsey was also honored as the Rookie of the Year for
autocross.
Lastly, Himanshu Patel was honored as the Zone 7 Enthusiast of the Year and joins a very special group
of past Zone members who have been so honored to have their name on the perpetual trophy.

Pictured below L/R are Bill Sardella and Himanshu Patel with Grady Carter. 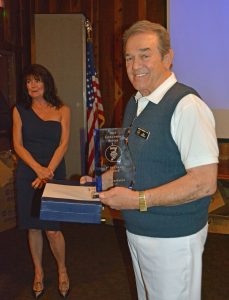 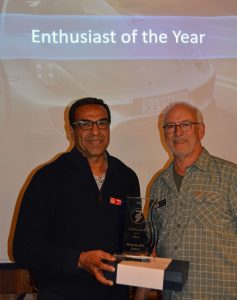 CRAB 38 will be hosted by Sacramento Valley Region, May 29-31. And Shasta Region will host the Zone 7 Tour again on June 11 -15. Porsche Parade 2020 will be held from June 21 – 27th at the La Quinta Resort in La Quinta, CA. with phase one registration opening in January. Sierra Nevada Region will host the Mammoth Tour July 25-26.PCA’s Treffen 2020 to be held at the Broadmoor in Colorado Springs in the spring and the fall Treffen at the Greenbrier Resort in West Virginia. The dates will be April 29-May 2, 2020 for the Colorado Springs event and September 16-19, 2020 for the West Virginia event. For more information on registration, go to treffen.pca.org/. Remember that past Treffens have sold out in as little as one hour due to their growing popularity!